November 13th District Council 6 acknowledged National Apprenticeship Week at their Strongsville Union Hall. This event captured the attention of 143 attendees for various schools within the surrounding areas including; Cleveland Heights High School, Cuyahoga Valley Career Center, Polaris Career Center, Clearview Local Schools, Max Hayes, Warrensville Heights and Medina County Career Center. Throughout the day nineteen students completed our general application, of which included seven young woman who are seriously looking to join the IUPAT. DC 6 recruited the help of our current apprentices and staff to assist these students with hands on demonstrations to capture the feel of what our trades involve. Current apprentices inspired these students by telling their stories on why they joined the union and how it has changed their lives. The International Union of Painters and Allied Trades District Council 6 invites you to join us for the Grand Opening of our renovated Youngstown Facility from 5:00 PM until 9:00 PM on Wednesday, April 25th.  The facility is the new home to Locals 847 and 476. Numerous Apprentices and Staff worked for months to get the hall debut ready. Join us in CELEBRATING our success! Food and drinks will be served.

Director of Training George Boots kicked off the evening, followed by DC6 Business Manager/Secretary/Treasurer and FTIOR Co-Chairman Jim Sherwood who congratulated the graduates on behalf of the FTIOR board of trustees, and the leadership team of DC6, “Good luck to all the graduating apprentices from District Council 6, you are the future of this union and this industry,” said Sherwood. After Charlie Meadows inspiring presentation, John Houlis, Matt Graff, Jason Liskai, Justin Oshel & Nick Papadorotheou recognized the graduates and presented them with their diplomas.

Apprentices who graduated that night:

Depending on the trades, apprenticeships can last from three to four years, during which time apprentices work and learn under the direction of experienced journey workers. Over time, apprentices are provided the diversity and complexity of training that leads to becoming highly skilled in their chosen occupations. As they gain skill, they are compensated through an increase in wages. Learn more about the many benefits of union membership and apprenticeship; fill out an information form How David Oberacker honors his Father’s memory while learning the true meaning of Union brotherhood and mentorship. 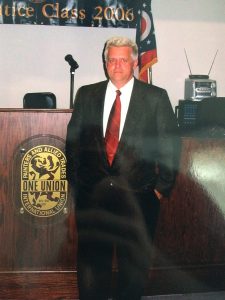 When David was growing up, he always wanted to be a Union Glazer like his father Bruce. After all, he spent much of his youth hanging around with his Dad and other union members at the training center in Strongsville, where Bruce was IUPAT DC 6 director of training. He watched his Dad’s journey from a non-union laborer to apprentice, then part-time instructor, training coordinator, training instructor, and finally director of training. He watched his passion for the trade and desire to be “the best Glazier in the city” turn him into a leader, who was instrumental in expanding the curriculum and creating hands-on training programs for Union Glazers.

“He was my hero,” said David. “I wish I could have been a student in one of his classes, but the values and pride he instilled in me will never be forgotten.”

In August of 2012, Bruce was suddenly killed in a tragic accident. David and his brothers were in shock. How would they fill the huge void that was left in their life after the death of their father? Who would help them? How would they keep his memory alive?

“Bruce was not only a member and employee in the union; he was one of my best friends,” said Jim Sherwood, Business Manager/Secretary-Treasurer of IUPAT DC 6. “All leaders at DC 6 take pride in mentoring young members, but from my perspective, David was special because of how I felt about his father.”

With mentorship from Sherwood and support from other DC 6 members, David began to follow in his father’s footsteps, but at first it was a rocky path. “When I first started, I didn’t have as good of a work ethic as I do now,” admitted David. “I might not have made it without Jim. He took the time to talk with me and point me in the right direction. And it worked.” 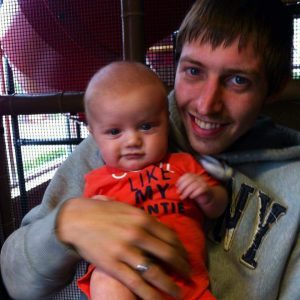 David and his son Dylan, born on his father’s birthday.

Today David’s believes that he’s fulfilling his Dad’s dream for him to become a Union Glazer, but also making the journey his own. “My dad had to learn the hard way, and I’m blessed to be learning the right way to do things. The right way ensures my safety and the safety of others, and the quality of our workmanship.”

Now when David goes home to his own family, which includes his wife Briana, his oldest son Cameron Bruce, and his younger son Dylan – who just happened to be born on his Grandfather’s Bruce’s birthday, he counts his blessings.

“I earn a good living and have a bright future as a Union Glazer ahead of me, just like my father always hoped for me, explained David. “I’ll be able to retire one day, and pass down the pride, work ethic, and leadership skills to my sons that my father taught me.”

“I know Bruce is very proud of David’s growth and achievements,” said Sherwood. “When David graduates from the apprenticeship program, it will be a very special day for me and all of DC 6.”