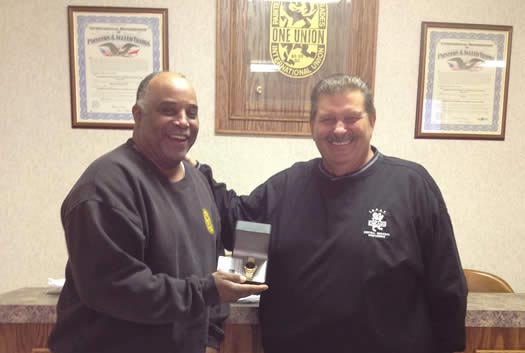 Once in a while a local union is blessed with a leader who actually inspires people to do more. When Harry Thomas had the floor, the passion and sincerity with which he spoke was impossible to ignore. He made it clear that joining a union meant more to him than paying dues and working hard. For Harry, his membership in the IUPAT was an honor that was won through struggle by the generation before and deserves to be protected by all legal means.

Known since childhood as “Tip,” Political Director Thomas always held true to his union blood. His career as a painter and paperhanger began in 1971 as part of the M. O’Neil Company’s decorating staff. His journey took him around Akron and Cleveland and spanned 28 years in the field. Tip stayed involved with Local Union 841 and served as Trustee, Recording Secretary, and President. He also served as delegate to District Council and Union Label committees.  In 1999 he was elected to the position of Business Representative for District Council 6. Tip served as BA for 12 years and was a devoted Political Director for 5 of those years.

Harry retired in July and his fire will be missed. Known for his vocal and occasionally raucous deliveries on the floor of Delegates meetings, Tip is, according to BM/ST Jim Watroba, “a genuine people person who continues to give back by volunteering his time with Council political activities.”

Thank you, Tip, from all the members of DC 6!